Thirumudukundram - Lord of this temple donated 12,000 gold coins to Sundararar 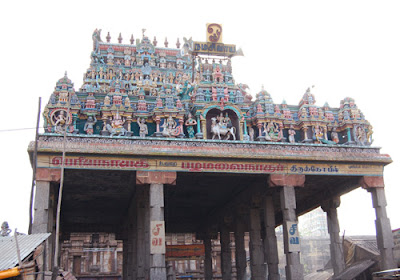 Temple Speciality
Lord Shiva in the temple is Swayambumurthy. Girivalam-cicumambulating the hill takes place on each Poornima-full moon days. The age of the holy tree Vanni is over 1700 years. It is the faith of the devotees that salvation is surety if he/she is born in the place, or live in the place, or pray the Lord here, or even thinking of Him even while elsewhere and die in this place. One of the above five criteria will free him/her from the cycle of births and deaths. As in Kalahasthi temple, Lord Vinayaka is in an underground shrinewith 18 steps to get in for worship. When the world was destroyed by pralaya floods, it is said that this holy place-Vruddhachalam stood unaffected and fully alive. Of the 1008 Shiva shrines of the country considered in high esteem, four lead this divine list of which Vruddhachalam is one.

The temple is praised as Agama Temple as this prestigious feature belongs exclusively to this temple alone. Vruddha means ancienet – Achalam the hill.  Vruddhalacham means an ancient hill. In chaste Tamil this is mentioned as Mudhu Kundram in Thevaram hymns.
http://namasivayavalga.blogspot.com/2013/07/lord-gifted-gold-coins-to-sundarar.html

Saint Gnanasambandar, in his hymns say that the Lord of the temple pours His blessings on the devotee for his/her happy and peaceful life both present and the one to come next.  Bathing in Muktha River ensures salvation, says scriptures.

Greatness of Temple
Lord Muruga with His consorts Valli and Deivanai graces the devotees from a shrine between Lord and Mother Vruddhambika shrine with 28 Shivalingas installed in accordance the Saiva Agama rules.  Lord Muruga is in a standing posture.  There are chakras above him promising the devotee that he would be blessed with all his wishes.  Lord Muruga with Chakras is rarely seen in a few Shiva temples only.  This is one among them. 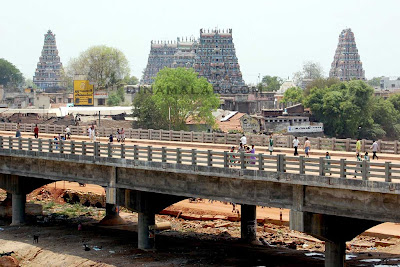 Number five has a significance in this temple.  Murthis are five –Lords Vinayaka, Muruga, Shiva, Shakthi and Chandikeswara.

There five towers in the temple at east, west, south, north and Kandarathithan (a Chola king) gopuram.

Five time puja is followed in the temple - Tiruvanandal, Kalasandhi, Uchi Kala, Sayaraksha and Arthajama at scheduled times from early morning till night.

Saint Sundarar was on a fund raising mission to feed the devotees on the Panguni Uthiram festival in Tiruvarur.  Lord of this temple donated 12,000 gold coins to Sundararar.  Beware of robbers on the way, he placed all the coins in the Manimutha River and collected it in the tank in Tiruvarur.  This is a strange precaution.  Money placed in a river cannot be collected from a tank that has no link with each other.  But this miracle happened.

Sundarar wanted to test the touch of the gold he took from the tank in Tiruvarur.  Lord proved the quality of the gold with Lord Vinayaka as a witness who confirmed the touch. 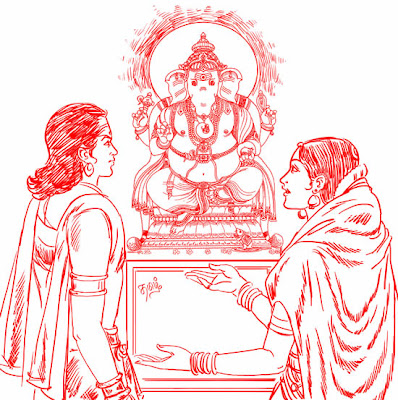 Hence, Vinayaka in the inner prakara of the temple is praised as Mattru-touch, Uraitha-confirmed, Vinayaka- Mattru Uraitha Vinayaka.

The Mudhu Kundram temple was renovated by Maharshi Visithu, it is said.  Mudhu Kundram is situated on the banks of Manimutha River.  As a tradition, Mother Durga is the ruler in Shiva temple.  Here, She appears along with Mother Umayambika-Vruddhambika in a standing posture.

Of the 1008 noted Shiva temple, four are considered very sacred. Mudhukundram temple is one among the four.  The place stood majestically alive even during the Maha Pralaya that destroyed the world.  During the renovation of the temple, Vibasithu Rishi used to give the leaves of the Vanni tree as wages to the workers.  Based on the quantum and quality of the work of the labourer, it fetched the due value, it is said.  The ashes of the dead when dissolved in Manimutha River change into a stone and stay underneath, according to sthalapurana.

There are many hymns sung by Tamil Pandits praising this place, Lord and Ambica.  Perianayaki Ammai Pathigam, Kshethira Kovai Venba, Pazhamalai Nathar Andhadhi, Perianayaki Virutham, Bikshadana Navamani Malai, Guru Darishana Pathigam, Pillai Thamizh are a few to mention.  During his visit to this place, the king of Karnataka suffered due to hunger.  Mother Peria Nayaki, as a young woman fed him with milk and named him Kumara Deva.

Lord Shiva as Nataraja danced in Thillai for a contest.  He played here for His own joy.
Vruddhachalam is as famous as Kasi-Varanasi as a salvation promising land known as Vruddhakasi.  It is also claimed that the benefit measure is a little bit more here than Kasi, hence the saying “Kasiyil Veesam Adhigam in Vruddhakasi”.  As believed in Kasi, here too Mother Vruddambika places the departed souls on Her lap and fan them with the pallu of Her Sari while Lord Shiva chants the Namashivaya mantra in the ears of the dead ensuring his/her salvation., according to Sthalapurana.

Vruddhambika means Goddess of elderly age.  Devotee Guru Namashivayar stayed in this place for a night on his way to Chidambaram.  He was very hungry and called Mother with a verse with a word Kizhathi.  Mother Periyanayaki came there as an old woman and replied that Kizhavi-old woman cannot bring food, only young woman can.  The devotee sang another verse describing the youthfulness of Ambica.  She appeared as a young beautiful woman and fed the devotee and thus came to be known as Balambika – young Mother.

Saint Arunagiriar had sung 10 Tirupugazh hymns on Lord Muruga of this temple. The temple is also praised by Kuamaradeva, Shivaprakasar, Vadalur Vallalar Ramalinga Adigalar in their hymns.

During the days of Saivite Saints Appar, Gnanasambandar and Sundarar, the place was known as Pazhamalai in Tamil and changed to the Sanskrit version Vruddhachalam in the days that followed. Vruddham means ancient and Achalam hill.

It is also said that Lord Shiva appeared here only in the form of this mount and other mounts came into being only later, according to scriptures.

Sundarar passed through this place without singing the glory of the Lord.  He was stopped by the Lord, made him sing and gifted 12,000 gold coins, placed it in Manimutha River and directed him to collect it from the temple tank in Tiruvarur, according to sthalapurana.
Sundarar Thirumurai :
http://namasivayavalga.blogspot.com/2013/07/lord-gifted-gold-coins-to-sundarar.html

Posted by namasivaya at 1:00 AM